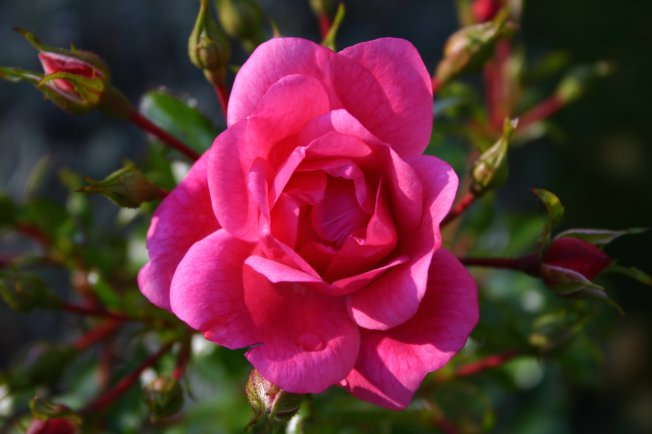 from “O Gather Me the Rose”

“O gather me the rose, the rose,
While yet in flower we find it,

For summer smiles, but summer goes,
And winter waits behind it.”

The last photo was taken on Sunday October 28th, with snow ringing in “winter time” (we set the clocks back an hour that night).

Every year the German Loki Schmidt Foundation pronounces a wild flower “Blume des Jahres” – Flower of the Year, in order to draw attention to the fact that certain plants and their habitats are endangered. I was particularly pleased to hear last week that the Hepatica nobilis (Liverwort – Leberblümchen) has been declared Flower of the Year 2013.

I love this flower, and if you saw my post in the spring, you will surely understand why. It is the first wild flower to show its pretty colours in March, sometimes even February. Where we live the conditions are perfect; chalky, well-drained soil, and shady and damp, undisturbed woodland floors.

We are fortunate to have so many in our region, since they have died out in some states of Germany already, and are endangered in many others.

When the Hepatica is flowering, no other flowers are yet in bloom – not even the violets – so I have been confused by one thing; imagine snow-covered ground, leafless trees, barely a hint of spring in the warm breeze, the first blue flowers peeping through patches of melting snow, and ….. a light and sweet perfume wafting in drifts across the footpath. Heavenly! I have never found the scent documented, so unless it’s my imagination I have perhaps just been extremely lucky to smell them! They MUST smell slightly, as ants are attracted to the seeds.

Do YOU know this wild flower?

My Japanese Maple inspires me again and again! 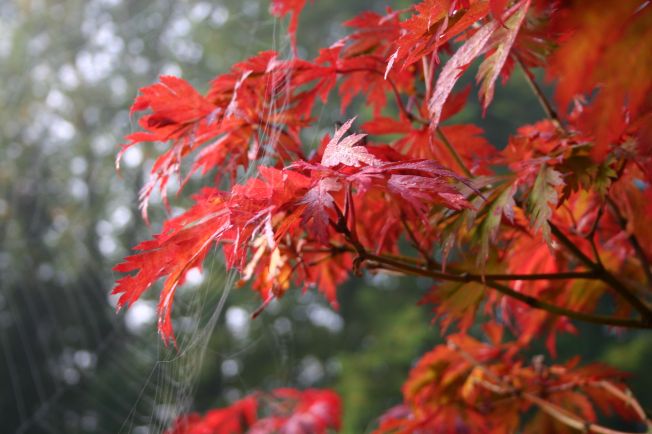 Woodsmoke hangs in the damp air

(Sadly the leaves have almost all fallen, so this is a photo from about two weeks ago.) 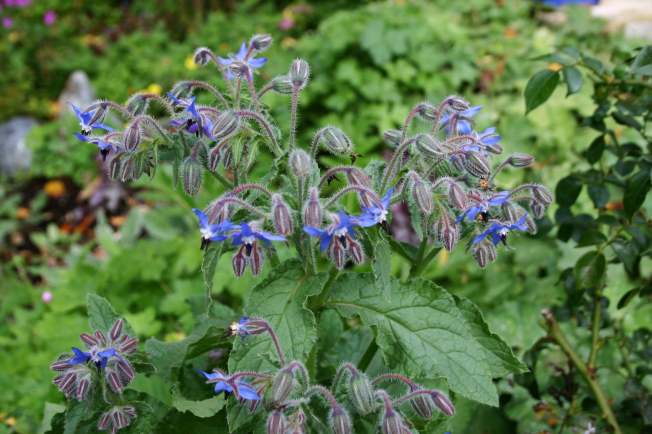 The borage took a while to get established this year; after the snails tried nibbling it, the slugs also had a go (yes – despite the bristly stems!), and the remaining plants finally started growing in the heat and drought of August. Since September though, they have been looking fabulous, filling in spaces where early poppies and spring bulbs left gaps.

In Germany it is one of the seven herbs used in the “Grüne Soße” -Green Sauce. It is also often added to cucumber salad. It is good for you, containing plenty of vitamin C, and as a herbal remedy it is said to help with stomach disorders, and ease symptoms of the menopause and rheumatism.  I have often used the pretty flowers in salads and for decoration, but recently decided to try the leaves… supposedly similar to spinach….

They are slightly prickly, rather hairy, and quite leathery too. I must admit I was sceptical!

This is not really a recipe. Every time I make a stir-fry I add different vegetables – whatever is in season or in the fridge!

Today there were some spring onions and carrots, sliced; a little zucchini and some tofu, cut into small chunks; peanut oil for frying; dark miso paste, garam masala and black pepper for seasoning; a few nasturtium leaves, and some udon noodles. Oh, and a spoonful of leftover sweetcorn! And of course a handful of borage leaves, which were added to the wok right at the end of the cooking time.

With the flowers as decoration it certainly looked good…

The verdict? Tasty! The leaves have a freshness that is hard to describe, but you can taste them beside the other seasonings.  They do not, however, overpower the other flavours at all. If you don’t have any spinach or chard at hand and want to add some greens to a dish, this is a great alternative. The texture is firmer than spinach, similar to that of sage. The prickles and hairs are undetectable after cooking!

A succesful experiment. And a delicious stir-fry!

What do you like to put in a stir-fry?

A couple of years ago I was afraid I would lose the star of our rockery, our Japanese Maple, as a fungal infection got one of its main branches. After treating it promptly, and chopping back some overhanging trees to give it breathing space, it seems to have fully recovered. I’m so glad we could save it!

The grasses below the maple come into their own at this time of year, especially when the wind rushes through them. 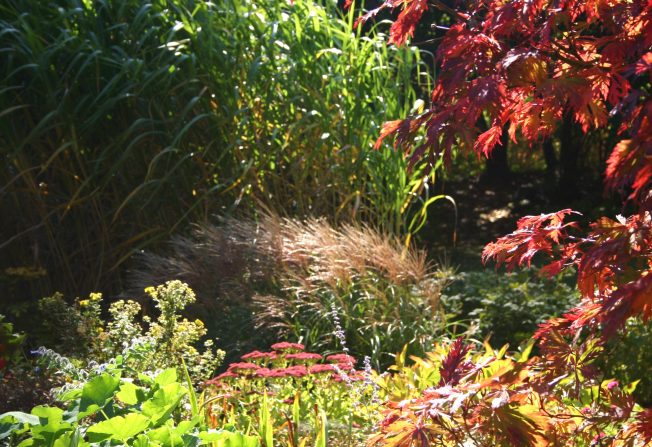 The tall grass is Miscanthus sinensis, and the short one in front of it is a dwarf Miscanthus – ‘Adagio’, pictured again below. Adagio only grows to about 1.5 metres (under 5 ft), and starts flowering late summer. It’s one of my favourites because I can leave it standing all winter and it doesn’t get untidy or flattened (unless we have really heavy snow).

This grass (pictured below) at the top of the rockery has flourished this year after a slow start last year (planted spring 2011). It is very slow to grow in the early summer, but then suddenly shoots up at the end of August! However, I have noticed it is spreading, so will have to watch it doesn’t become invasive. It was sold to me as a carex, but I’m not sure about that. (Maybe you know what it is?) 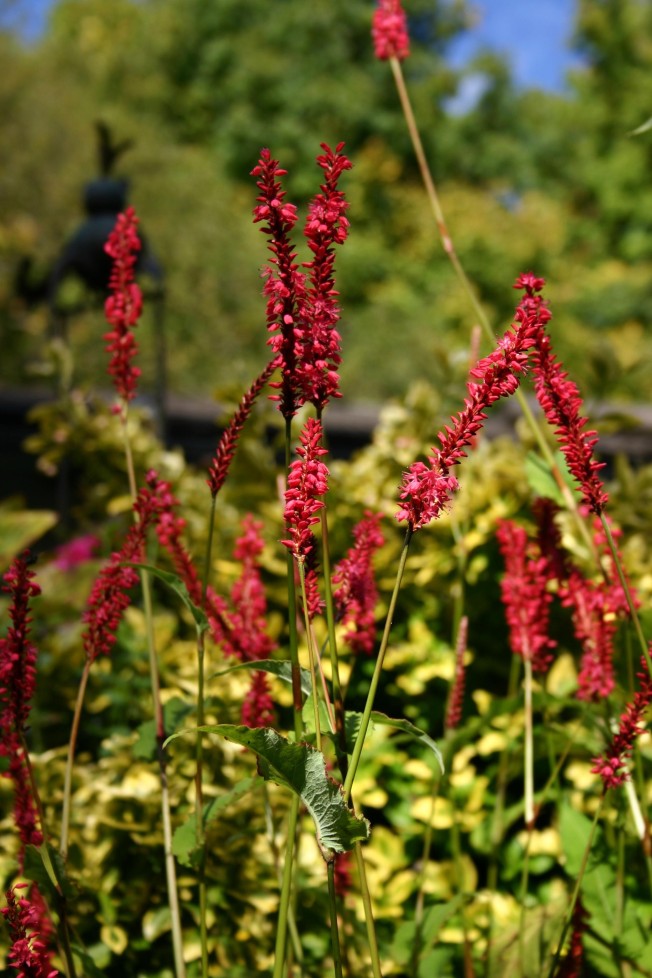 It adds height and interest to the rockery in autumn when all other flowers are slowly dying back. The background leaf is a Euonymus fortunei ‘Emerald and Gold’ – beautiful all year round.

Note: All these photos were taken last week, and within days the garden has changed, with more golds and the acer’s leaves now falling…

Enjoy the rest of the autumn while it lasts, everyone!

This was something new and different… My dear friend Strawberryindigo (aka Nancy, but I like her pseudonym so much!) at Serendipity13 has invited me to join the Ligo Circle of Appreciation. 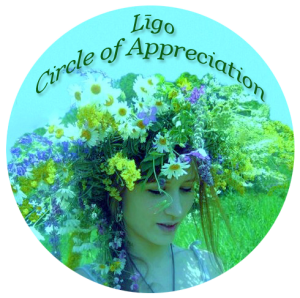 I felt honoured, but also very curious! What is a circle of appreciation?! I needed to take a look at the origin of this…

It has originated from Esenga’s voice , a Latvian blogger. She writes:

The yearly Līgo celebration happens every summer solstice in Latvia.
At this time we adorn our heads with Līgos of flowers, oak leaves,
grasses and plants. We join circles around bonfires and celebrate life,
and our appreciation of each other.

Here’s our
Līgo Circle of Appreciation
among fellow bloggers.

For duration of 22 days, starting on 1st October 2012, we will be inviting
2 bloggers per day
to join the Līgo Circle of Appreciation.

PLEASE NOTE: This is an Appreciation, NOT an Award.

To fully participate in the Līgo Circle of Appreciation:

1. Complete this sentence about blogging: “A great blog is…

2. Serendipity13 is such a blog – please take a look at Nancy’s beautiful site! She always makes me smile and brightens my day! And thank you for inviting me Strawberryindigo!

3. I would like to invite the two following blogs:

Tj’s Garden: Tj lives in the Arizona Sonora Desert and has a garden full of heat-tolerant flowers and plants which she presents on her blog. Tj also writes about the local wildlife – fascinating creatures visit her such as coyotes, or giant desert hairy scorpions… Her articles are always so interesting and I love to see what grows and lives in her part of the world.

Nuts for Treasure: Eunice is a fun-loving, hard-working blogger! I love her photos, her tales and stories, and her dedication; a lady with oodles of personality and a big heart. She has recently shown us some lovely photos of autumn colour in New Hampshire. Every post is a delight!

Have a great weekend everyone!

Don’t you just love the smell of autumn? For me autumn smells of woodsmoke, damp leaves, ripe fruits… and cinnamon spice! 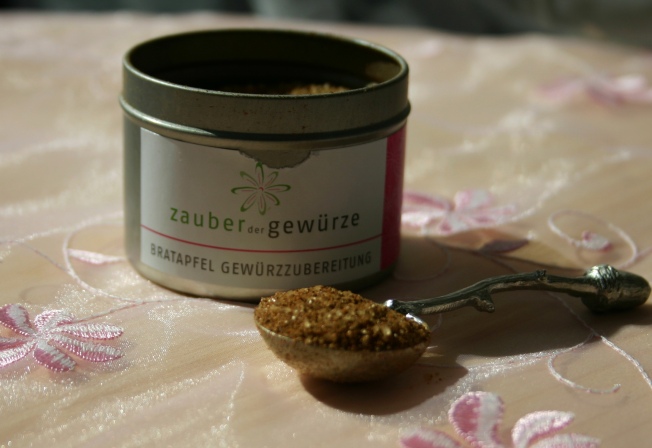 This sugar is called “Bratapfel” spice, which means roasted apple spice… and it is the perfect mixture for autumn apple dishes. A mix of golden sugar, cinnamon, cloves and vanilla. When I opened the jar the sweet aroma whispered to me…  “applecakeapplecakeapplecakeapple…”

Combine flour, sugar, baking powder, spices and baking soda in a bowl. In a separate bowl whisk together the egg, buttermilk and melted butter.  Then pour the wet ingredients into the dry and stir until just combined. Gently fold in the apples. 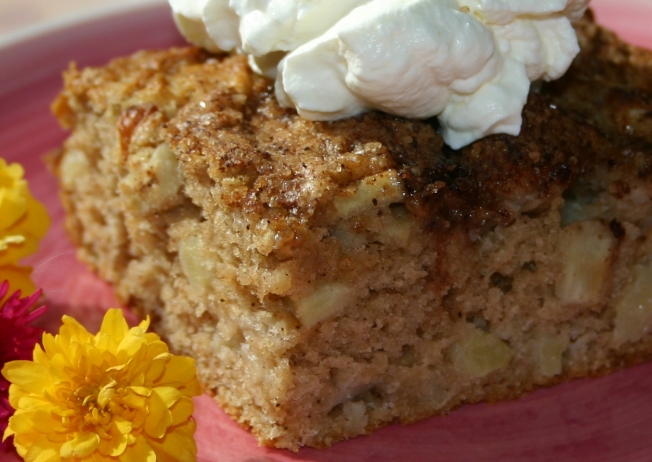 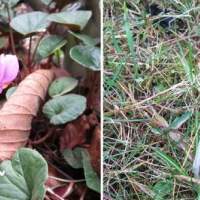 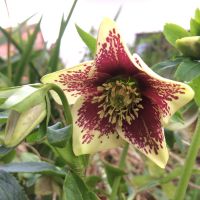 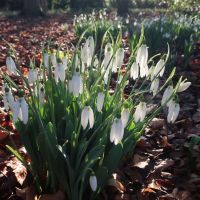 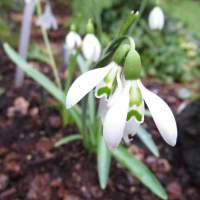 © WordsAndHerbs 2011-2018. Unauthorized use and/or duplication of this material without express permission from this blog’s author is strictly prohibited. Excerpts and links may be used, provided that full and clear credit is given to Cathy and WordsAndHerbs with specific direction to the original content.

Words and Herbs
Blog at WordPress.com.